A zombie fire is a wildfire that appears to go out but really just moves underground. There it smolders and burns unseen until the conditions on the top are ripe for the fire to erupt again in its full, destructive measure. There are zombie fires erupting now in the Arctic as the planet warms. They are also erupting now in our cities, as justice is, yet again, denied.

The injustices of racism, poverty, discrimination, and unequal access to the basic necessities of life have never, in the entire history of the United States, been fully addressed. Atrocities have been covered up, ignored, and even justified. And the righteous anger of those whose very humanity is questioned, repressed, and stolen cries out and tries every legal means to be heard—in the courts, in the church, in the community, at the ballot box, through governmental leaders.

When those cries go unheeded; when those of us with power and privilege close our eyes and ears and even attack those who are asking merely to breathe or eat or find safe water to drink, those who are suffering begin to wither, to dry out. The cries cease for a time. Their breath fails and their rage goes underground. Those who have steady access to life’s waters believe that the fire has gone out.

But as the numbers of the parched grow, it only takes one more privileged person stepping on their dried out bodies to provide enough friction to light a fire. And when the number of those from whom the waters of life have been withheld have multiplied enough so that they are spread like kindling from sea to shining sea, just one spark quickly becomes a wildfire whose spread cannot be contained. Those who have never known thirst; those who have never been denied breath are shocked. "Those fires were extinguished long ago!" They were not. They are zombie fires that have been living and smoldering below our Gucci-clad feet.

The prophet Amos called for justice to roll down like waters and righteousness like an ever-flowing stream. Justice is the only water that can fully extinguish the fire; but it has to be an ever-flowing stream. If it’s just one spurt, the fire might pull back, but it will simply become a zombie fire, burning beneath the surface until the bit of water on top dries out again and a heavy boot presses the dry brush down into the hot embers beneath.

The fires burning now are not new fires. They are the combination of countless zombie fires that we have failed across centuries to properly extinguish with the tears of repentance, the bath of atonement, and an ever-flowing stream of justice.

For those of us who hold positions of power—the white, the wealthy, the Christian—who now rage at being denied the comfort of our sanctuaries and rituals; for those of us who are eager to call for the breath of God on Pentecost for ourselves in a place where we cannot hear the dry souls who are literally crying out that they cannot breathe—take several seats. Amos would like a word:

Therefore because you trample on the poor
and take from them levies of grain,
you have built houses of hewn stone,
but you shall not live in them;
you have planted pleasant vineyards,
but you shall not drink their wine.
For I know how many are your transgressions,
and how great are your sins—
you who afflict the righteous, who take a bribe,
and push aside the needy in the gate.

I hate, I despise your festivals,
and I take no delight in your solemn assemblies.
Even though you offer me your burnt offerings and grain offerings,
I will not accept them;
and the offerings of well-being of your fatted animals
I will not look upon.
Take away from me the noise of your songs;
I will not listen to the melody of your harps.
But let justice roll down like waters,
and righteousness like an ever-flowing stream.”

If we enter the doors of our sanctuaries for anything other than organizing the justice water brigade, the only clothing acceptable is sackcloth and ashes, and the only text that should be read, the only words that should be spoken are the entirety of Amos chapter 5. The whole congregation should read it aloud, over and over and over again, until we manage to hear the Word of the Lord and develop ears to hear.

The fires are burning in our streets in large part because we have hoarded the living water in our churches and legislatures and only let it flow out to those we deem worthy. Justice is the only water that will put out the flames, and it must be an ever-flowing stream--No dams, no spigots, no water rights for some and not others. Until the dry bodies of the oppressed find streams in their deserts that are fresh, constant, and unpolluted by bigotry and hate; until black and brown bodies can drink from the same fountains and swim in the same lakes as white bodies without fear; until women’s rights are human rights, and no one must beg for bread; we simply feed the flames that will, in the end, consume us all:

Seek the Lord and live,
or he will break out against the house of Joseph like fire,
and it will devour Bethel, with no one to quench it.
Ah, you that turn justice to wormwood,
and bring righteousness to the ground! 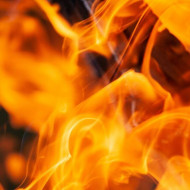